Strawberries were first commercially grown in Victoria’s Yarra Valley during the 1950’s. Strawberry production started in this region as migrant families begun to settle on the outskirts of Melbourne, particularly in those areas with rich fertile soils.

Today there is close to 100 strawberry farms within Victoria, and they spread from Portland in the south west to Wodonga in the north east. However the majority of farms, 75 percent, are still located within the Yarra Valley, a short 45 minutes from Melbourne’s CBD.

Back in the 1950’s strawberries were only distributed through the Melbourne market, that was until Gordon Chapman took the first consignment of strawberries to the Sydney market on the back of a basic flat-tray tuck in the 1960’s.

Through the production of different varieties the Victorian strawberry industry is able to supply fruit to the Australia market for 8 months of the year beginning in October.

Want to pick your own (PYO) strawberries? If so use the map below to find the location of your nearest PYO strawberry grower. Be sure to keep checking back as the number of growers offering PYO is constantly growing, and if there is not one near you we’re sure there will be in the near future.

Click here to take a tour of a Victorian Strawberry farm! 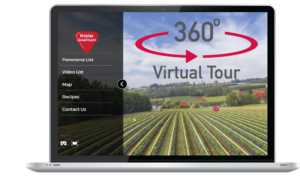